Clear the Clutter: Stop Organizing and Just Have Less Stuff 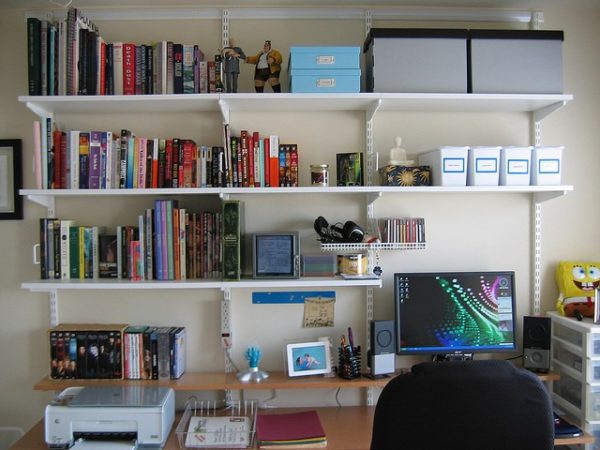 If you’re a Pinterest person, as I am, then no doubt you have read hundreds of intricately detailed tips about how to organize your stuff. These run the gamut from color-coded bins and meticulously organized junk drawers to hidden shelving units tucked neatly into the empty space below the stairs. Well, folks, I don’t want to brag, but I have three tips for you that will blow Pinterest right out of the water in the home organization department. Best of all, they are simple, eco-friendly, and don’t cost a cent.

Want to know the secret to organizing your stuff? Here it is: Have less stuff.

Yup. It’s that simple. Just like the secret to budgeting is spending less money than you earn, if you don’t have more belongings than you do space to store them, organizing simply isn’t an issue. You won’t need to fiddle with PVC-pipe cubbies or hanging shoe racks on the back of every door.

Here’s another secret: The amount of stuff we have expands to fit the space we give it. So, apologies to anyone who, like me, used to think that living in a giant white-walled hardwood-floored mansion would enable you to be perfectly organized. The answer is not more space; the answer is less stuff.

Tired of being tied to your stuff, stuck in a cycle of consumption where you buy more stuff to organize the stuff you already had?

Here are a few eco-friendly tips to help you pare down.

Yes, you read that right, it’s “stop,” not “start.” The less you consume, the less you must pay for, store, clean, maintain, and replace or throw out when it comes to the end of its life.

Cutting your consumption of consumer goods is arguably one of the most helpful green changes you can make. Think of the time, resources, energy, money, and landfill space you will save by simply not buying that thing. Congratulations! You have suddenly become approximately 18 times more efficient!

Go through your belongings, and be ruthless. Imagine you are moving: Would this item be worth packing, loading into a truck, transporting 3,000 miles, and then unpacking and finding a place to keep it? This should help inform your decision to keep it or not. As you decide what to keep and what to say goodbye to, ruminate on this quote by William Morris:

“Have nothing in your houses that you do not know to be useful or believe to be beautiful.” Make sure you do this purging in an eco-friendly way. Donate any clothes that are in good condition and cut the rest into scraps for reuse projects or cleaning cloths. Recycle electronics at your local e-waste recycling facility. And donate usable kitchen items, furniture, and housewares to secondhand stores that benefit charities.

Try to keep an empty shelf somewhere in your home, just to remind yourself that space doesn’t exist simply to be filled. We are getting really zen here, but just go with it, okay?

Those moments when you start lingering over home organization boards on Pinterest or shopping for another new storage unit are clues. They are clues that you may once again be starting to have more stuff than space. When you start feeling disorganized, that is the universe (and your overloaded laundry hamper) telling you that you may need to get back to basics, stop shopping, and let some things go. It’s a process. Don’t beat yourself up about it. Begin again.

Over time, a delicious reality will reveal itself: Possessions aren’t rewards; they’re responsibilities. And having less stuff doesn’t mean deprivation, it means freedom! It benefits you, the home you create, and the natural world we live in. Enjoy it.

And don’t forget, Pin this for later! Feature image courtesy of Jed Sullivan. Originally published on January 2, 2015, this article was updated in October 2020.

The post Clear the Clutter: Stop Organizing and Just Have Less Stuff appeared first on Earth 911.