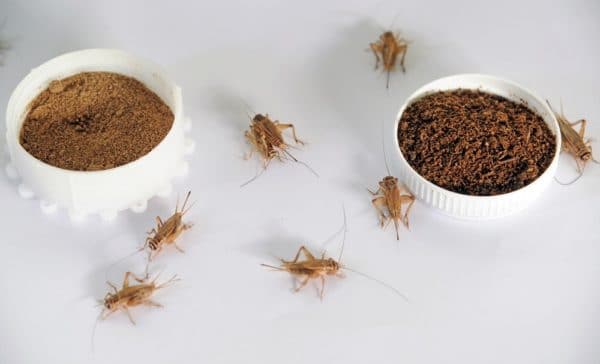 What if there was a healthy alternative to mammal- or fowl-meat pet food? Would you consider feeding bugs to your beloved dog?

As it turns out, insects like crickets are not only a great protein alternative to traditional animal proteins, they’re also a more sustainable choice.

You may have heard that reducing our meat consumption is one of the most environmentally positive decisions we can make. Scientific American reported about a United Nations Food and Agriculture Organization study that stated: “our diets and, specifically, the meat in them cause more greenhouse gases carbon dioxide (CO2), methane, nitrous oxide, and the like to spew into the atmosphere than either transportation or industry.”

Additionally, the demand for cheap land to graze cattle and grow the crops to feed them is partly responsible for rainforest deforestation. How we manage livestock grazing and the agricultural production of animal feed have the potential to cause desertification.

Many scientists believe that we need to drastically reduce meat (and sugar) consumption if we have any chance of halting climate change. What do you feed your dog if you want to reduce your climate impact? One good choice is cricket protein.

With a lifespan of six to 10 weeks, crickets are easy to raise. They eat much less and need much less space than cattle, chickens, pigs, sheep, turkey, or even fish. They also release zero methane, unlike burping cows.

Also, 80% of a cricket’s body can be eaten while only 55% of poultry and 40% of a cow are edible. There’s a lot more waste in so-called traditional meats and a lot more input to produce less output. Cricket protein is much better for the environment compared to others. What exactly is cricket protein? To process a chirping cricket into food, they are first frozen. Then they are boiled for sanitization. Some processers roast the crickets next while some don’t. Roasted or not, they are then ground into powder or flour. The resulting nutty-flavored cricket powder is a complete protein that, according to Chippin, has more Omega-3 and B12 than salmon.

Dog food companies that use insects in their treats and kibble tend to mix in recognizable and yummy flavors. We’ve seen blueberries, honey, carrots, and sweet potatoes on ingredient lists right next to crickets.

Jiminy’s offers both kibble and treats made with cricket powder. Founder and CEO, Anne Carlson, previously worked for a big pet food company and understands the scale of protein that the industry consumes. She told us that she started Jiminy’s to take on climate change and change the pet food industry. She believes that alternative protein can have an enormous effect on slowing climate change and she is committed to the science behind it.

Our little taste tester loved the sample treats and kibble. Mavis was hesitant at first but then gobbled up the kibble before any of her regular food that it was mixed with. The treats were soft and moist and also enthusiastically eaten.

Chippin Snacks was founded by two women who wanted sustainable treats for their dogs. The company offers package recycling through a TerraCycle brigade. Additionally, all subscriptions come with a reusable, recyclable tin, and no other wasteful packaging. We talked to co-founder Laura Colagrande who told us that the name Chippin refers to “chipping in” to make shifts in our own lives to help the world as a whole do better. She told us that Chippin is a small business thinking big and always innovating. They do not want to limit themselves to only crickets as the business grows.

Our taste tester was pleased with the Chippin samples as well. The treats were bigger but easily torn into smaller, bite-sized pieces for our little doggie. They were soft but slightly crunchy. No hesitation this time at all!

Wilder Harrier is a Canadian dog food company that offers kibble, treats, and dental sticks. This company was founded by three young men looking to change both the human and dog food systems. They not only use alternative proteins (crickets in treats but also black soldier flies and seaweed in other products) but they also utilize food waste. Mat Poirier, CMO & Co-founder, told us that for their cricket-based treats, instead of new fruits and veggies, they use pulp from a local cold-pressed juice company that would otherwise be thrown away.

Mavis tried the cricket-based training bite treats. They were small and hard, about the size of her normal kibble. She was definitely a fan.

What do you think? Will your doggie chow down on crickets? If you’re not sure about feeding your dog bugs just yet, consider some other green dog food alternatives.