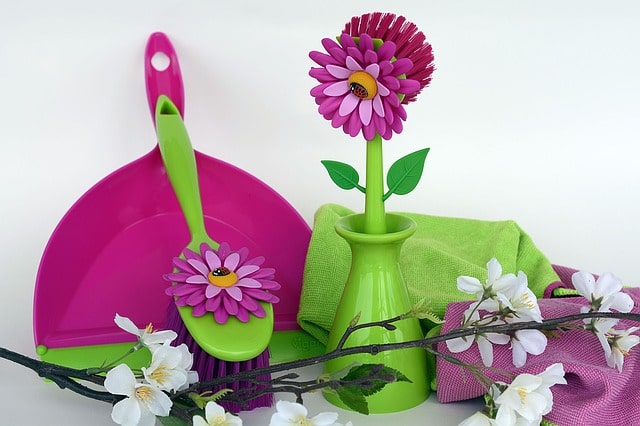 Switching from conventional cleaning products to green alternatives can benefit both the environment and your well-being.  Many companies don’t advertise this fact, but the traditional cleaning solutions we use every day contain toxins with the potential to irritate and even harm our bodies.

Phthalates in dish soap, triclosan in detergents and ammonia in household glass cleaners can all adversely affect the health of users.  Many are unaware that these are ingredients in some of our most trusted brands. The chemicals we absorb through our skin or by inhalation can cause both short- and long-term issues.

Raising awareness of the problem is the first step toward solving it.  If you have an understanding of the dangers posed by your current cleaning products, you become more willing to replace them with non-toxic, eco-friendly substitutes.

In this article, we’ll walk you through what you need to know, what to need to avoid and what to look for in your cleaning products.

Avoid These Ingredients if You Can

Before the advent of our consumer ad driven society most people used home made products for their cleaning needs.  However at the end of the 19th Century, companies began to develop cleaning with little consideration for their effect on the user.  Commercial cleaning products and processes were developed to give us convenience.

Little attention was paid to the long list of harmful ingredients embraced by industry.  These included but the list doesn’t end with phthalates, triclosan and ammonia.  Do your own research, just check the ingredients of the products in your cupboards and look up their sometimes harmful side effects.  You will be shocked by what you may find.

There is a clear danger from the chemicals used in dry cleaning, according to Judith Schreiber, Ph.D., the chief scientist of environmental protection for the New York Attorney General’s Office, perchloroethylene, or “perc,” is a neurotoxin.  “You’re at risk for neurological effects, liver and kidney illness, and increased cancer risk,” she stated in a CBS News interview.

This news should be unsettling to learn since it’s a component of many commonly used spot removers, carpet cleaners and dry-cleaning solutions.  Since its classification as a “possible carcinogen” by the Environmental Protection Agency, it’s best to avoid any products with perchloroethylene.

Quarternary ammonium compounds which are commonly known as “quats”, are a standard element of most antibacterial solutions.  They’re a common ingredient found in fabric softener liquids.  Available evidence shows that quats can cause respiratory problems like asthma in users who handle the dangerous compound on a regular basis.

One of the most common toxins is found not only in cleaning products but also in our tap water.  That makes it a challenge to avoid.  Chlorine is a common ingredient in many laundry whiteners, scouring powders and dishwashing detergents that can cause thyroid problems.  These can result in weight gain, and fatigue, among other symptoms.

Castile soap is a popular green alternative easily purchased at your local supermarket and other stores. Made exclusively from vegetable oils, Castile soap is different than many common soaps manufactured from synthetic materials and animal byproducts like tallow, lard and other fats.  It’s also a multipurpose substance, ideal for use in bathing as well as your laundry.

Apple cider vinegar is as another harmless cleaning ingredient. Beyond its numerous health benefits — improving heart health, reducing cholesterol and aiding in weight loss — apple cider vinegar is a safe substitute for standard household solutions. Suitable for use on countertops, toilets, showers, sinks and glass, a little ACV will take on the toughest of stains.

Borax sounds menacing however it is quite beneficial.  Borax is a natural cleaner that’s less harmful than most conventional products found today on your store shelves.  It’s perfect for washing laundry and general use around your home.  It is also highly effective as a pest repellent, especially for those with an ant problem.  You don’t want to swallow it, so parents with children should take precautions.

How Many Green Cleaners are Already in Your Home

In addition to the green products you purchase from a store, you likely already have many eco-friendly cleaning solutions in your home.  Baking soda, cornstarch, olive oil and alcohol are all effective as  secondary household cleaners.  It may be a surprise, but vodka has a secondary use as a powerful odor remover if applied in the proper context.  So take a look through your cabinets to see what else is available to you!

Here’s an extra tip for green cleaning.  Instead of wasting an excessive amount of paper towels to scrub down surfaces, purchase a few cloth towels to use.  This will further reduce your impact while saving you money and space on bulky paper towel packages you don’t really need.

Sustainability begins with you, and that includes your household cleaning products.  Replacing your toxic cleaning solutions with green alternatives benefits your body, your home, your wallet and the environment all at the same time.  An investment in an eco-friendly lifestyle is an investment in your future.