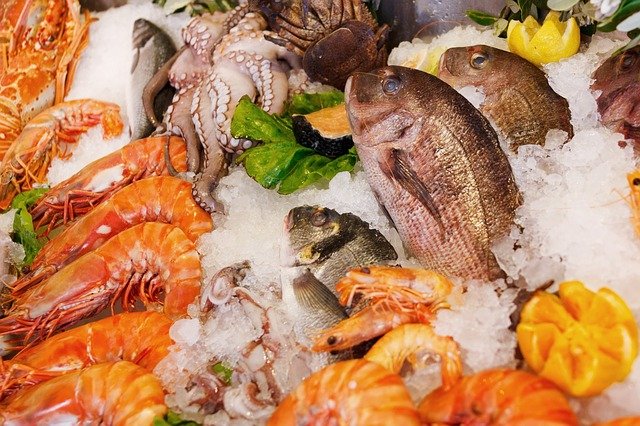 A vegan diet may be the single most effective way for individuals to minimize their environmental impact, but giving up meat is a huge challenge for many people. A pescatarian diet — that means eating fish and other seafood but no other meats — can be a practical step on the road to veganism or even a permanent middle ground between a harmful diet and one that’s hard to maintain.

Fish is an easy, healthy protein source that can satisfy the meat craving without triggering (for some people) the same ethical concerns as eating mammals. Environmentally speaking, though, the impact of eating seafood can vary by quite a lot. Here’s how to make your seafood diet as eco-friendly as possible.

According to Seafood Watch’s carbon emissions tool, crustaceans have the highest carbon footprint of all proteins, because so few are caught from each trip, and because they require so much bait. The Marine Stewardship Council (MSC) has a certification for these crustaceans, but none of the certified lobsters and only a few of the crabs get the green light from Seafood Watch. It’s usually good to avoid eating crustaceans.

Farmed prawns are almost as damaging to the environment as eating red meat. Poorly regulated shrimp farms in Asia destroy mangrove forests and pollute waterways, can produce antibiotic-contaminated shrimp, and have even been linked to human trafficking. To find responsibly harvested shrimp, look for shrimp certified by one of the three Seafood Watch-approved labels: Aquaculture Stewardship Council (ASC), Naturland, or Global Aquaculture Alliance.

Surprisingly, tuna is a good choice. Tuna has a carbon footprint that is lower than most marine whitefish and even farmed freshwater fish. However, overfishing and bycatch (the capture or destruction of non-target species) are significant problems with tuna fishing. When buying tuna, the details make a big difference in sustainability. Skipjack/light tuna and albacore/white tuna generally have lower carbon impacts than other types of tuna. Tuna that is caught in the U.S. by trolling or handline fishing methods is better than tuna caught with drifting longlines or floating object purse seines (FAD). Whatever kind of tuna you buy, look for MSC certification.

Despite the potential of some newer land-based aquaculture projects, farmed fish generally results in carbon emissions that are comparable to pork or turkey. Salmon aquaculture on both the East Coast and West Coast has a history of environmental violations. Fish farms contribute to water pollution and jeopardize the health and genetic integrity of wild fish populations. It is always good to look for eco-certification when buying farmed fish to minimize these impacts.

Wild-caught fish is a better choice than farmed fish. Both wild-caught salmonids and marine whitefish have a lower carbon footprint than their farmed counterparts, despite the fuel requirements of ocean-going vessels.

Salmonids like arctic char and steelhead trout may be better choices than salmon, which is at greater risk of overfishing. The impacts of different species of whitefish and methods of catching them vary widely. Generally, species that live closer to the ocean’s surface are better choices than deep-water fish.

Farmed shellfish has a much lower carbon footprint than wild-harvested, despite limited data and questions about water quality impacts. Filter-feeding clams, oysters, and other mollusks require low inputs. In fact, they require no added feed (which contributes to eutrophication at fish farms). Farmed mollusks are among the best choices for a low-carbon protein source.

Small pelagics are small-sized ocean fish from schooling species such as anchovies, mackerel, menhaden, and herring. These species are always wild-caught, never farmed. For wild-caught seafood, the fuel used to power fishing boats is usually the largest contributor to the carbon footprint. Ships that catch small pelagics tend to be more fuel efficient and catch their loads all at once.

Overfishing is still a concern, but as a rule of thumb, small pelagics are the most sustainable seafood choice.

From a climate standpoint, seafood (except lobster) is always a better choice than red meat. But the full impact of a particular seafood choice depends a lot on fishing methods and whether the fishery is well-managed to avoid overfishing. Letting sellers know there is a demand for more sustainable seafood will make a difference. When you’re at the fish counter, be sure to ask if their seafood is sustainable.