How Sustainable Is Lab-Grown Meat? P 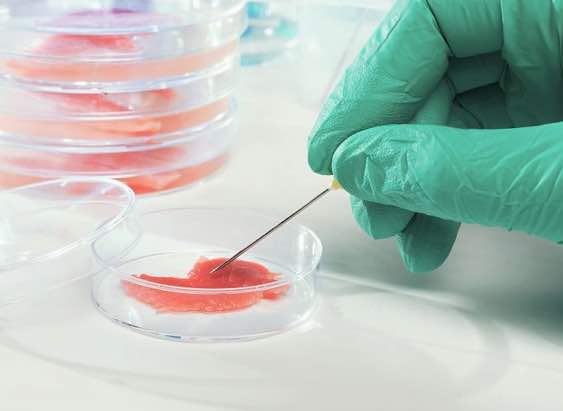 Cultured meat is widely hailed for its potential to spare animal lives, cut greenhouse gas emissions, and help solve the global food crisis. It’s an advanced technology that offers an alternative to climate-warming meats, but is it sustainable?

Lab-grown meat is a type of cellular agriculture that grows proteins from a culture, cell by cell. It’s also called genetically-engineered or cultured meat as well as the tongue-in-cheek test-tube meat and stem cell steak.  With the news that Singapore is the first country to approve a lab-grown meat product for commercial distribution, the possibility of getting our dinner from scientists rather than farmers is closer than ever.

What’s the Logic Behind Lab-Grown Meat?

Factory farming is an enormous problem. It’s energy-intensive, contributes to land, water, and air pollution, and produces 37% of global methane emissions that contribute to climate change. Plus, conventional factory farming practices are famously cruel to animals.

If the pandemic has taught us anything, it’s that rampant food insecurity affects one in nine Americans, while worldwide, almost 2 billion people are food insecure. The promise of lab-grown meat is an environmentally friendly and humane protein source for the world’s hungry. At least, in theory.

How Do Labs Grow Meat?

No animals are killed to grow meat in a lab. Instead, cells are taken from animal biopsies and grown by in vitro cell culture. To grow animal tissue, labs use similar techniques to those used in regenerative medicine; the difference is that meat is generated from scratch. This involves intensive work to “feed” and maintain the cultured meat.

Companies like Memphis Meats, which have been working on cultured meat for years, dub the facilities where they grow their meat products “carneries” (a play on the word “breweries”).  These facilities contain big metal vats, called bioreactors, with piping installed to circulate a “watery goo” that helps with tissue engineering. The “goo” consists broadly of amino acids, fats, vitamins, minerals, proteins, sugars, iron, insulin, oxygen — all of the nutrients needed to encourage cell growth.

Because so much is still based on modeling, we don’t have hard numbers for environmental impact yet, but some early studies estimate it may create more problems than it solves.

The Downsides of Lab-Grown Meat

Animal agriculture accounts for more than 14% of global GHG emissions caused by human activity, but lab-grown meat may, in fact, worsen climate change. Although it’s expected to produce more CO2 than the more potent greenhouse gas, methane, CO2 takes much longer to dissipate.

Plus, the inferred cruelty-free nature of lab-grown meat can be misleading. The goo needed to culture the meat currently requires fetal bovine serum, which is obtained through a process that raises ethical concerns.

Due to the many variables, production is very expensive from an environmental standpoint. Some of these variables include energy used (and emissions created) to culture and nurture the meat; the need for sugar to feed the cells (likely from corn, which requires land use); and unclear plans for waste treatment at carneries.

When cultured meat becomes available for wide consumption, it will be pricier than conventional meat for some time — in 2013, this would have been $300,000 for one burger but is now closer to $3,800/pound.

The Upsides of Lab-Grown Meat

According to Dr. Carolyn Mattick, who conducts sustainability studies on lab-grown meat, it likely wins against factory farming with a drastically lower amount of water pollution and land use.

While there are concerns over potential bacterial contamination of the cultures, there is also the potential reduced risk of disease from meat produced without livestock kept in such close quarters. This may even help convert farmers to the cause in the long run.

Ultimately, if scientists conclude cultured meat is better for the environment, it may divert more meat-eaters from the factory farming status quo. For many, the biggest barrier to reducing dietary meat consumption is culture; some even believe dominion over animals is a God-given right, which makes plant-based alternatives a hard sell.

What’s in the Cards for Cultured Meat?

For the moment, the idea of genetically engineering meat is bogged down in regulatory disagreements between the FDA and USDA. In the long term, widescale production of cultured meat would need cost- and resource-effective energy infrastructures to be feasible.

As for the sustainability question, there are no clear answers yet (but there’s a lot of healthy skepticism). Dr. Mattick says lab-grown meat is “not inherently better or worse, but different.” So, it’s not an automatic win as some believe — but it has potential.

The post How Sustainable Is Lab-Grown Meat? appeared first on Earth 911.