Is Glass or Plastic a Better Choice For The Environment? * 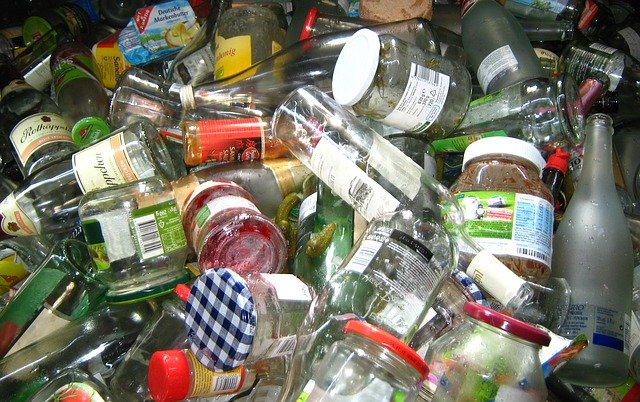 How Come Glass is the Darling of the Zero Waste Community?

Environmentalists seem to embrace glass over plastics as something that is preferred.  Is part of our bias against plastic simply related to the fact that only 9 percent of the plastic produced is recycled.  That’s a terrible statistic, however there is so much more to consider.

We actually have to think about what it takes into producing and recycling both glass and plastic.  Another important consideration is the afterlife for both products.  Which is the friendliest environmental choice when you consider all factors, glass or plastic?  The answer may not be as clear cut as you think.

What is the Zero Waste Impact of Glass?

Let’s look at zero waste proponents most loved material, Glass.  It’s important to note that glass is in many cases perpetually recyclable, back to its original useable material.  Glass maintains it’s quality and purity, no matter how often it’s recycled.  However, is it actually being recycled?

What Are Some of the Environmental Problems With Glass?

Making new glass requires sand, lot’s of sand.  While we do have lots of sand on beaches, deserts and under the ocean, we’re using it faster than the planet can replenish it.

We use sand more than we use oil.  The bad news is that only a specific kind of sand can be used to make glass.  It’s too bad, but all that desert sand can’t be used.  Most of the sand we can use is harvested from riverbeds and seabeds.

Removing sand from our natural environment disrupts the our fragile ecosystems.  Living in sand harvested from rivers and oceans are microorganisms which feed the base of the food chain.  Removing sand from the seabed also leaves shore communities open to flooding and erosion.  Since we need sand to create new glass, you can see how this would be an issue.

Another problem with glass?  Glass is heavier than plastic.  Glass also breaks much easier than plastic during transit and use.  More emissions are produced while transporting glass than plastic, and it costs more to transport.

Something else that needs to be considered, most glass isn’t recycled.  Only 33% of waste glass is recycled in America.  That means million tons of recycleable glass is sent to landfills every year in the USA.

Glass recycling rates are low for many reasons.  Often glass in recycling bins is used as a cheap landfill cover to keep costs low.  Colored glass can only be recycled and melted down with like colors.  Specialty glass used to make Pyrex cookware and windows are net recyclable because of how they are manufactured.

Finally, scientists estimate that glass can take a million years to break down in the environment, or in a landfill.  That just points out some of the problems with glass and how it impacts the environment.  Let’s take a closer look at the lifecycle of glass.

What is the Raw Materials Depletion Rate for Glass?

Glass is made from all-natural resources, including sand, soda ash, limestone and recycled glass.  It’s important to understand the sand used to make glass is not an unlimited resource.  Worldwide 50 billion tons of sand are consumed each year for glass production.  This is twice the amount produced each year by all the world’s rivers.

After harvesting these materials, they’re transported to a manufacturer where they are inspected.  The next step os being sent to a furnace for melting into glass.  The glass then goes through the finishing process to reach the final product.

The final product is then transported to be washed and sterilized.  The last step is transporting the glass products for sale and use.  When glass products reach their end of life find’s them collected and recycled.  Unfortunately only 33% of the millions of tons of glass that Americans throw away is recycled. The majority of glass waste goes to a landfill.

When glass is collected and recycled, it repeats the process of transportation, batch preparation, and everything else that follows again.

How Do Energy Use and Emissions Compare for Glass Production?

What Are the Recycling Rates for Glass Products?

If a glass manufacturing facility used 50 percent recycled content to make new glass, there would be a 10 percent decrease in GWP.

A 50 percent recycle rate would remove 2.2 million metric tons of CO2 from the environment.  That’s the equivalent of removing the CO2 emissions of nearly 400,000 cars every year.

While glass is completely recyclable, some facilities choose to instead crush the glass and use it as a landfill cover.  Doing this is cheaper than actually recycling the glass, or finding an alternative cover material for landfills.

Using glass to cover landfills doesn’t help the environment or reduce emissions.  It’s essentially reducing glass recycling and preventing it from being reused.

Ensure that you understand your local recycling laws before you recycle glass.  Check if your glass will actually be recycled.  Glass recycling is a closed-loop system and doesn’t create any additional waste or by-products.

What is the End of Life Rate for Glass Products?

Because its life cycle is so long, and since glass doesn’t leach any chemicals, it’s better to repurpose and reuse it over and over before recycling it.  Since glass is nonporous and impermeable, there are no interactions between glass packaging and the products inside.  Resulting in no after taste, ever.

Glass has an almost zero rate of chemical interactions.  This ensures that products inside a glass bottle keep their flavor, strength and aroma.

I guess that’s why lots of zero wasters encourage people to save all their empty jars for reuse.  Glass is great for storing food bought in quantity, leftovers, and even home made cleaning products!

What is the Impact of Plastic on Our Environment?

The zero waste community has a habit of criminalizing plastic.  Is plastic as bad as they say?  Let’s examine the facts.

What Are the Environmental Problems With Plastic?

Most plastics today are still petroleum-based.  This makes the materials both non-renewable and unsustainable.  Drilling for oil causes problems which may include disturbing land and marine ecosystems.  Dealing with oil can result in oil spills, which contaminate soil and water and may cause other problems for our environment.

Plastics carbon footprint plastic is hard to ignore.  From the moment raw materials are made into plastic to their disposal, plastic emits carbon dioxide.  In 2015, the emissions from plastic in equaled nearly 1.8 billion metric tons of CO2.

It’s hard to believe that only 9 percent of plastic is actually recycled. Considering we’ve made 8.5 billion metric tons of it since large scale production began, that’s a very low recycle rate.  While the glass recycling rate is 33 percent.

When recycled, plastic can only be down-cycled, meaning it becomes an item of lesser quality.  It will never be the same item again.  Eventually, this leads it to become a waste item that is no longer recyclable and destined to end up in a landfill, or the environment.

It’s important to remember that unlike glass, plastic leeches toxic chemicals into the environment as time passes.  Plastic don’t truly break down either, but instead becomes microplastics which pollute our waterways and even contaminate our very soil and the air we breathe.

What is the Raw Materials Depletion Rate for Plastics?

Plastics production involves using the “cracking process” to treat the components of crude oil or natural gas.  This process converts these components into hydrocarbon monomers, such as ethylene and propylene.

Additional processing produces other monomers, such as styrene, ethylene glycol, terephthalic acid, vinyl chloride and others.  These monomers are then chemically bonded into chains called polymers.  The various combinations of monomers yield different kinds of plastics which have a wide range of characteristics and properties.

How Do Energy Use and Emissions Compare for Plastic Production?

All these different plastics serve different functions, though some are easier to recycle than others.  As you can imagine, creating all those plastics takes a lot of energy and resources.

In 2007, researchers Peter Gleick and Heather Cooley estimated that meeting the demand for bottled water demand alone required the energy equivalent of between 32 and 54 million barrels of oil.  And that’s just bottled water!  This means producing plastic water bottles each year releases more greenhouse gas emissions than over a million cars on the road.

From production to end of life, plastics have a surprisingly carbon-intense life cycle.  When they’re transformed into products and transported to market, they emit greenhouse gases either directly or via the energy required to accomplish them.

Even after you dispose of plastic, be it through dumping, incinerating, recycling and composting for certain bio-plastics, all release carbon dioxide.  In 2015 the emissions from plastics equaled almost 1.8 billion metric tons of CO2.  This number is only expected to grow.

It’s expected that the global demand for plastics will increase by some 22 percent over the next five years. Just to break even, we’ll have to reduce emissions by 18 percent.

Unless we change course, emissions from plastics will reach 17 percent of the global carbon budget by 2050.  This budget basically estimates the max amount of greenhouse gasses we can “safely” emit without making global temperatures rise more than 1.5 degrees Celsius.

In other words, there’s really no room for increasing greenhouse gas emissions.

What Are the Recycling Rates for Plastic Products?

It doesn’t help that only 9 percent of plastic is actually recycled, either. Humans have created 8.5 billion metric tons of plastics since large-scale production began in the 1950s, and most of it is in a landfill or our environment.

You can imagine how this impacts carbon emissions. While it certainly would be better to have a higher recycling rate for plastic, it’s definitely not the end all solution.

After all, plastic can only be recycled so many times. In fact, it’s technically downcycled into a lesser quality item, meaning it can never be the same thing more than once. Eventually, it becomes unrecyclable altogether and ends up as a waste product.

What is the End of Life Rate for Plastic Products?

It should be noted that plastic also takes a very long time to disintegrate and break down.  A plastic bottle for example, takes 450+ years to disintegrate, and perhaps a thousand years if they’re in a landfill.

If you compare that to how long glass takes to disintegrate, you might think it’s a better outcome. However, it’s important to note plastic releases toxic chemicals into their surrounding environment as they break down, unlike glass which does not.

We have plenty of room to improve on our recycling game, but recycling plastic certainly isn’t the end-all-answer to our plastic problem.  Replacing fossil-based energy with renewable sources would have the greatest impact on plastic’s greenhouse gas emissions overall.

While idealistic, if we transitioned to 100 percent renewable energy it would reduce emissions from plastic by a whopping 51 percent.

Which is Really Better for the Environment?

Glass and plastic both have their pros and cons.  The best result for society would be us reducing our reliance on anything single-use!  If you use it once and then place it in the recycling bin, try to find another solution.

Of course there are exceptions.  Realistically there’s no way we’re going to completely eradicate single-use products.  However, we can definitely make a dent in it by being more conscious about our purchases.

Is Glass A Better Choice Than Plastic?

And, you should try to reuse your glass bottles and jars!