The Eco-Unfriendly Truths About Fireworks 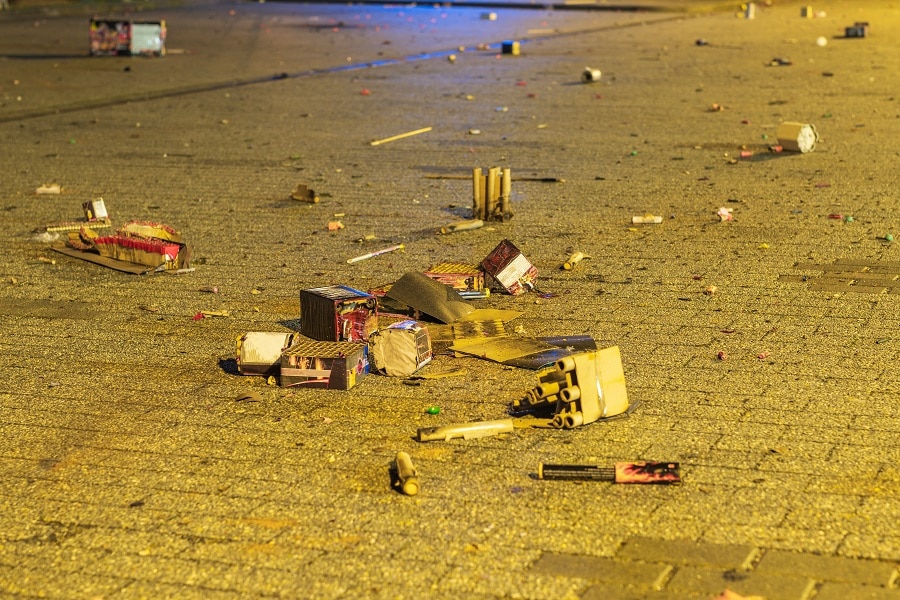 They light up the sky beautifully, those bright and bold fireworks. But they don’t come without environmental hazards, no matter what time of year they blast off.

The composition of fireworks creates highly toxic gases when they are lit. And those pollutants can poison not only the air but water and soil, threatening human and animal life. Fireworks are pretty, but they’re also pretty bad for the Earth.

What’s Coming Out of Your Fireworks?

It’s not just booms, whizzes, and flares of color that emerge from fireworks. If you’ve gotten close to any erupting displays, you’ve seen how much smoke fills the air within seconds. But what’s the complete makeup of those clouds? To get such festive results, there is a lot of science involved.

A chemical reaction between compounds and chemical explosives produce the different colors each at a specific temperature. For example, pink comes from lithium salts, yellow and orange come from sodium salt, and red can come from calcium or strontium. These heavy metal salts undergo a chemical change when they’re combined with oxygen. That reaction is what creates carbon dioxide, nitrogen, carbon monoxide – the greenhouse gases that have a major role in climate change.

While it might seem like the pyrotechnics explosion would burn off the metal salts, it doesn’t. The components of the fireworks are released as aerosols that poison the air, water, and soil. And they hang around for a while and may never fully disintegrate. The aftermath of fireworks can even cause physical reactions for people who ingest or inhale the particulate matter and smoke, like asthma attacks, vomiting, and cardiac toxicity.

The Depth and Reach of Pyrotechnics

It may seem like a single Fourth of July fireworks show isn’t that big of a deal and couldn’t be that harmful in the grand scheme of things. A, along with aerosols and dangerous gases

Keep in mind that, in some places, there aren’t just one or two fireworks shows happening every year. In Disneyland and Disney World, a fireworks extravaganza happens every day, sometimes twice a day. And the aftereffects of that extravaganza don’t just stay local.

Pollutants that emerge from fireworks travel quite a distance – 62 miles downwind over two days, according to one study – contributing to toxic pollution in the air, and then taking their toxicity to watersheds when the heavy metals are washed out of the air by rainfall. Picking Through the Aftermath of Fireworks

While fireworks do some of their biggest environmental damage to the atmosphere by polluting the air we breathe, they are also a big problem on land and water. Pyrotechnics set off near a body of water deliver an immediate impact, polluting the water with pieces of the fireworks and even affecting the taste and odor of drinking water.

The components of pyrotechnics are also left behind. Litter is a very big problem where fireworks are concerned. Many parts of fireworks, firecrackers, and sparklers – you don’t have to be lighting the big stuff to damage the environment – are not biodegradable. Paper is used in a lot of these materials, but so is plastic, creating a dangerous collection of debris that could injure humans, pets, and wildlife.

Then there is noise pollution. Fireworks and big bangs go together, but these explosions are a health hazard that could damage hearing and trigger people with PTSD. Fireworks also contribute, albeit briefly, to light pollution, an environmental problem that can affect animals’ wake and sleep patterns, migration patterns, and habitat formation.

You can, of course, avoid the effects of a fireworks show by choosing to partake in other festive holiday activities or distancing yourself from a pyrotechnics display. But the Earth can’t do the same.

If you feel strongly about the effect of fireworks, take action to change what’s happening in your community. Raising a voice is a powerful way to highlight the danger of fireworks and the importance of protecting the environment. Most people don’t realize just how damaging fireworks are to the land and life around them.

Some places opt for alternatives to fireworks, like a laser light show, professional-grade fireworks made from biodegradable materials, and the purchase of carbon offsets. There is always a way to live a little greener.

The post The Eco-Unfriendly Truths About Fireworks appeared first on Earth911.com.