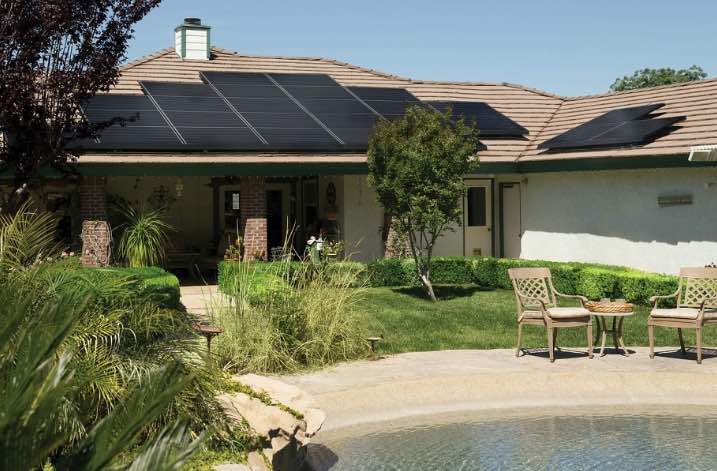 Solar energy accounted for 43% of new electricity-generating capacity last year in the United States, according to the Solar Energy Industries Association (SEIA). As more and more homeowners install solar panels on their roofs, they weigh the pros and cons. Whereas electricity savings are relatively simple to calculate, some of the other benefits are somewhat more complex.

One important consideration is how solar panels will impact the property value. Gaining some understanding of the benefits of a solar energy system on a home’s resale value can make going solar more appealing.

How much can solar increase a home’s resale value?

Multiple studies have attempted to answer this question. The simple answer is roughly 4% of the selling price. Unfortunately, some of the studies are a bit outdated now, but they show that installing solar panels does increase the resale value.

A 2019 Zillow study found that houses with solar panels sold for a 4.1% premium than similar homes without them. The increase equals an additional $9,274 for the median-priced house. However, the price premium did seem to vary by location.

In Riverside, California, solar homes sold for a mere 2.7% premium versus a 5.4% premium in New York City. The price premium for solar homes in San Francisco, California and Orlando, Florida were nearly identical, at 4.4% and 4.6%.

Why do homes with solar systems sell for more?

Houses with solar PV installations are cheaper to own because the utility bills are significantly less. This is especially true when homeowners can take advantage of net metering through their electricity company. In many cases, they will pay only the delivery fee on their monthly electricity bill and have no charge for consuming power. This happens when the solar energy system produces as much electricity throughout the year that the home consumes. Thus, the house is considered “net zero.”

Utility outages have become more frequent in some areas due to natural disasters. The Texas power crisis of 2021 left several million households and businesses without electricity, sometimes for days. Concern for wildfires has caused utility shutoffs to help prevent blazes. Solar energy systems with batteries also make a home more resilient during grid outages. In some situations, energy storage capabilities can prevent property damage, such as frozen pipes, spoiled food, or basement flooding. During blackouts, solar batteries can help power a heating system, sump pump, or refrigerator. People with home offices might also be able to work despite the power outage, thus being more productive. Also, solar systems with battery backup offer peace of mind during natural disasters because the home is more resilient. Although solar systems with batteries have many benefits, adding batteries does add considerably to the total solar system cost.

Similarly, several studies show that energy-efficient houses also sell for more than less efficient dwellings. The operating expenses for efficient homes are less, thus they are cheaper to own. Additionally, some home shoppers find energy-saving homes more attractive because they are greener and consume fewer fossil fuels.

How can I value my solar system?

Increasingly, homeowners and realtors have been pondering how to value a solar system when selling a property. Thus, the SEIA created a guide on valuing residential solar systems. They present three different methods.

How do I prepare to sell a solar home?

It is crucial to make sure your solar system is in good working order. If you have solar monitoring, review the data to make sure the solar system is performing well. Having the invoice for your solar system available helps appraisers, realtors, and potential buyers understand the value of the installation. If the solar system is still under warranty, have this information available as well. Most solar panel manufacturers offer a power performance warranty for at least 20 years. Likewise, having electricity bills on hand helps demonstrate the financial savings of owning a solar energy system.

The post Does Going Solar Increase My Property Value? appeared first on Earth911.